To a writer, ink is blood.
Within each of us is a microcosm waiting to find its way to text. We spill ourselves over a page and give not only words life, but the universes and characters inside of them, as well. But as important words are, so are images and the beauty of symbolism.
Symbols are representations of who we are. What we are. What we strive to be. They enrich us and our worlds, be them fictitious or otherwise. Above all else, they’re immortal, surviving us when we turn to ash because they’re more than skin deep.
… Unless, well, they literally are skin deep.
With my adoration of symbolism on the written page, I naturally came to love the idea of having it on my body. I wanted to get a tattoo, to be adorned by ink. However, the weight of such a decision made me take years to get one. Being a writer, I value the depth the right imagery produces. Being introspective, I had to make sure it was something that truly defined me. Combined with the fact I chose the best artist for the job who had a months-long wait before he was open for consultations, it was a process that took as much time as it needed to.
So when I decided to get a tattoo of a murder cabin in demon-infested woods, I knew it was going to be perfect!
One of my favorite movie franchises is The Evil Dead. The series features the main hero, Ash (portrayed by the legendary Bruce Campbell), battling demonic forces unleashed by readings from the book of the dead, the Necronomicon Ex-Mortis. Through hacking and slashing possessed pals to time travelling to the middle ages, the series has taken on many different tones. Horror and camp combined to make a movie experience unlike any other. And it all started with an eclectic group of friends.
Sam Raimi (Hollywood director) and Bruce Campbell (the B movie King) grew up together in Michigan where they started out making and starring in homemade Super 8 flicks. But as they grew older, the itch to create an actual movie became greater and greater. But how?
The two young men, along with friend Robert Tapert (Hollywood producer), decided first they needed to work on getting a budget. They filmed a prototype to show investors, a short horror film called Within the Woods, where Campbell’s character gets possessed after unearthing an ancient Indian dagger and proceeds to homicidally torment his girlfriend. Next, they had to pitch it to investors!
As teenagers, they went around their community, knowing nothing about business and legalities. It was a long and arduous task asking anyone from their parents to the butcher, the baker, and the candlestick maker to support their project, but eventually they raised $150,000.
After finding actors from placing an in-hindsight seedy-looking ad, scrounging together a crew, and cleaning out a manure-filled cabin in Tennessee for a set, they began filming. The months that followed in the low-budget hell of production were far from glamorous. Shooting was plagued by a series of unfortunate events from a tree limb bludgeoning Raimi to Campbell’s brother falling over a cliff (but surviving.) With an inexperienced crew and cast, the six-week shoot stretched into twelve, making that winter an especially harsh and unforgiving season. But the trials tested their perseverance and no-budget-like-low-budget innovation when it came to filming.
Eventually, shooting at the cabin wrapped up. What followed after was a series of loans, even more shooting at other locations, and post-production magic. Then the editing process, aided coincidentally by Joel Cohen (Hollywood writer and director) who was an assistant editor at the time.
Once the movie was finished, it successfully premiered at a local theatre and from there, they tried to sell it. Eventually they did, to sales agent Ivan Shapiro. This lead to The Evil Dead playing in the Cannes Film Market in France where Stephen King proclaimed it to be “the most ferociously original horror film of the year.” From that, the film got great exposure, selling around the world.
I’d like to say it was smooth sailing for our trio from there, but it wasn’t. There was no instant success to be found after such an already-long process. It was many years of slugging it out and trying to build a career. But mistakes, failure, and rejection are all a part of success. Today, the three are successful men, coming a long way from the boys they used to be, but in many ways, still are.
With that, my tattoo represents more than just over-the-top gore and camp. It’s a cabin bathed in darkness, symbolizing the primal fear found in the woods that has inspired storytellers for generations.  It’s my love for a genre that sparks my creativity. Most importantly, it’s the reminder that with hard work, dedication, and enthusiasm dreams can come true. It won’t be easy, but that’s part of earning your stripes. And, of course, that with great friends, anything is possible.
Finally, here it is! 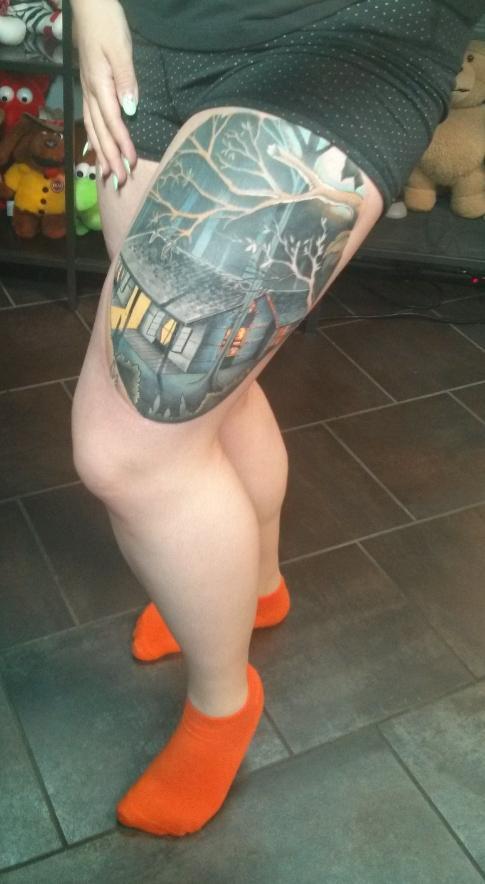 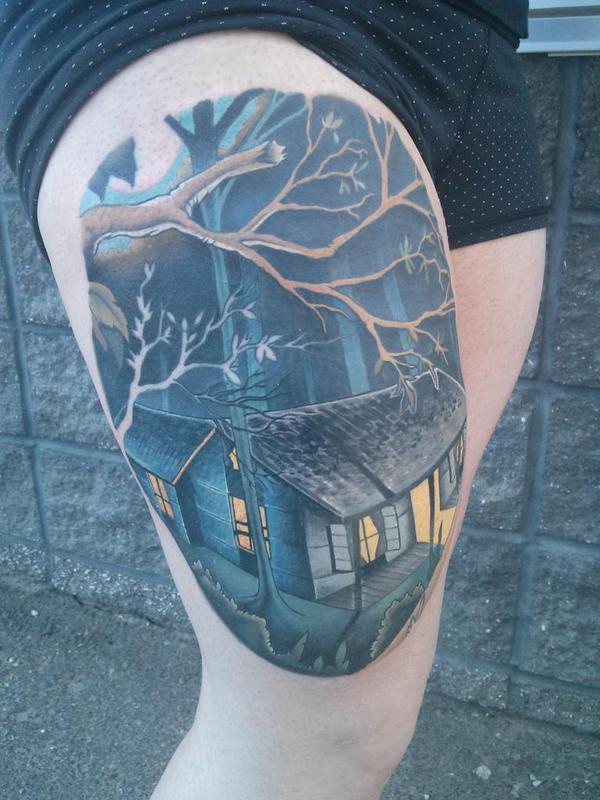 Once I return to dust, this beautiful ink will vanish, but what that cabin means to me and millions of fans will last forever. Now give me some sugar, baby.
Thanks!
Take care!
Larysia
Psst … My artist was Marshall Khalil from Crimson Empire Tattoo in Edmonton, Alberta. Check him out on Instagram and the Fan Service Art Collective.