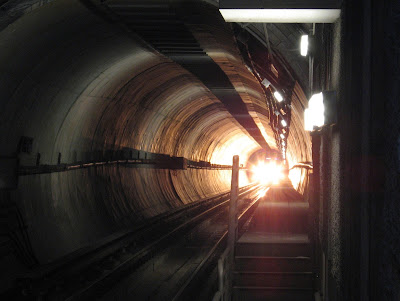 She slumped against the bench on Platform 2. She’d never taken the train home this late before. The subway was creepy at this ungodly hour. The lights seemed dimmer in the emptiness. But despite not seeing anyone else she didn’t feel alone. That was worst part.


“’Cuse me.” A voice slurred behind her.


She started, snapping her head its way.


A homeless man adjusted his pants. “Youse got the time?”


“Three’s a bad time.” He shuffled away, tossing over his shoulder: “Leave. Before it comes.”


She raised an eyebrow, watching him depart. Or try to. Suddenly, he was yanked back and crimson exploded from him. She jumped to her feet, looking for an attacker. But there was none she could see.
The girl bolted, taking the stairs two at a time, heart thundering in her chest. Tossing a look over her shoulder, she saw the lights flicker on the subway platform. She could hear the old man screaming. He abruptly stopped. Blood pooled across the gritty tile and into her vision.


Footsteps belonging to no one parted the red and rapidly ascended up the stairs after her. She shrieked; the last thing she ever saw was nothing at all.


I did this piece for the flashfiction magazine, 200-Word Tuesdays. I selected August’s theme of “Unseen.” This month I was actually one of the folks who suggested a theme. A poll was done and mine was one of the themes chosen.


I drew inspiration from all the times my imagination went wild on me while taking the train home late.


Thanks and take care! Travel safe ;)


Again, not sure where the picture came from. If you want credit, let me know!
Posted by Larysia at 09:15