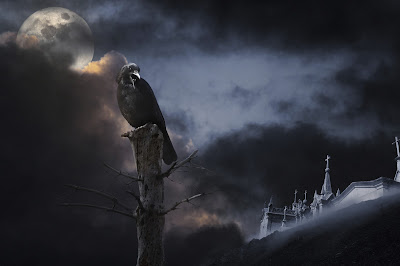 Fog crept through the pumpkin patch, moving to the cemetery beyond Farmer Duggan’s fields. Against the backdrop of night, a raven cawed, watching the precipitation reach hallowed ground. The bird blinked, a heavy moon reflecting in its black eyes. With curious knocking at the back of its throat, it rested upon a dying branch, shifting its weight as it waited.

A figure pulled itself from the cold white: a hellhound with glowing crimson eyes. It put its nose to the earth, inhaling. It sneezed and padded to the tall gravestone belonging to Donovan Jacoby. The murderer.

The raven cocked its head.

Underneath a praying angel, the hound dug with its massive clawed paws.

With a cry, the raven flew down, taking on the form of a man in a black suit with ebony wings. The hound stiffened and looked up slowly, a snarl on its muzzle.

“The veil may be thinnest this time of year,” the angel said, “but that doesn’t give you permission to enter sacred ground. Not even for this monster’s tantalizing bones. You don’t cross our paths, we don’t cross yours. That’s the deal. And so, you must be brought to heel.”

After agonizing minutes, the raven took to the sky again, hearing yelping echoing from the cavernous pits of hell.

Hey, all!
I wrote this piece for the 200-Word Tuesdays Magazine. I selected October's theme of "Deal Breaker." Inspired by the season, I came up with this.