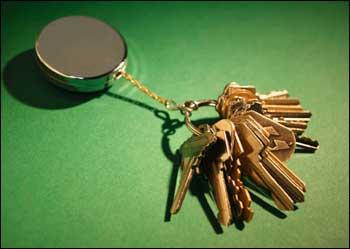 She sat in the room.

Her knees were pressed up against her chest and her back was against the wall as she stared at the door. The walls framing the only means to escape were a faded yellow, stained with the rust of dried blood. It decorated the wall in a myriad of gruesome splattering that could almost be considered intricate. The stench of copper turning foul churned her stomach.

Her left arm throbbed in pain. She did her best to ignore it.

Footsteps came down the hall. And shouting. Crying. Begging.

She sniffled, her left hand tightened around the hatchet. Her right hand tugged at a tattered sleeve to hide a smiling wound. She slowly rose to her feet, back sliding against the wall as she braced herself.

With the rattling of keys, the door swung open. Hands shoved him into the room and locked the door behind him. He wasn’t much older than she was. She took an uneven step forward, weapon raised.

“W-wait!” He cried, face tear-streaked. “T-thuh bad man said we had to fight.”

She nodded, motioning to a rusted knife in the corner for him to pick up.

But she never would if she let him live.

I did this piece for the flashfiction magazine, 200-Word Tuesdays. I chose October’s theme of “Myriad.” I was unfortunately inspired by the horrors of human trafficking. Sadly, this work of fiction doesn’t compare to the brutality of real-life.

Thanks and take care!

Again, not sure where the picture came from. If you want credit, let me know!
Posted by Larysia at 07:46