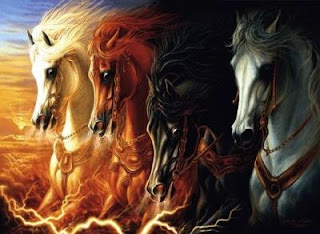 The sound was like a scythe cutting through air followed by a thunderous rumble. People perked up in the ruined streets like prey, eyes stretching wide in alarm. Women grabbed children, men grabbed women, and they ran. They scurried into buildings—former homes, shops, schools—and bolted down to the dugouts within them. Some reached safety in time before the airstrike dropped its bombs.

Kashif’s mother threw her boy into the building. Hands pulled him in over the threshold and slammed the double doors shut.

But that did nothing.

Light, bright and wrathful, poured in from around the frame and between the hinges. The room briefly illuminated with heaven-like rays before the doors blew inwards. Everyone shrieked, a crescendo of mortality briefly muted by a chorus of explosions.

Kashif watched his mother amidst the light. She reached out to him, feet above the ground, hovering like an angel. Then a great plume of fire blossomed like a lotus, engulfing her. The flames roared, licking his flesh before sending him backwards.

The men beside him were launched off their feet. Together, the trio sailed until they hit a wall. The man on his left was crushed by one of the metal doors. The one on his right managed to shield him. He crumpled atop Kashif, who laid there dazed.

The boy’s ears rang. His insides hurt. The weight of the man made it impossible to breathe. Grunting, he shoved with his skinny arms, moving the limp form just enough to wiggle free. He took a peek at the man, who was still.

He didn’t look hurt. But sometimes the dead never did. He saw when they were scavenging once, coming across a bloated ashen girl. She rested like a fallen stone cherub, milky unfaltering stare captivated by oblivion. Concussive shock, his mother muttered when he asked. He wanted her to explain what that was and she shook her head, growing somber, removing the girl’s shoes that were now his.

Suddenly, the man coughed. Blood sprayed from his mouth, marking Kashif’s pointy face. He wiped his cheek with the back of his hand and staggered away as the man gurgled. He locked gazes with him. Panic coupled with resignation. They both knew the man was going to die.

Kashif emitted a low whimper before erupting in tears. He limped outside, ignoring the pain in his chest and the flowing sticky wetness under his nose.

“Mama!” He cried, entering a void of hot dust.

The haze was thick. Grey and orange filtered his vision through a white layer of dust from disintegrated concrete. Wincing, Kashif coughed, expelling the particles that wanted to settle in his lungs. Ruby droplets coated his tongue. He lifted his t-shirt over his nose and let his eyes water.

Towers of smoke danced to the great blue sky, undulating in time with flames. Smoke and fire intertwined, flirting with one another before parting briefly. They would always rejoin, embracing playfully. Wispy fingers beckoned the boy to have fun with them, but he refused.

He needed to find his mother.

The crackling fire was punctuated by screams. “Mama?” His head snapped to each sound, struggling to see who it belonged to. But the harder he squinted, the more he realized he didn’t want to see.

Figures appeared from the dusty fog, misshapen monsters. A weeping female figure shambled towards him, reaching out, but missing a hand. With a small cry, he turned around to see another form pulling itself along by the arms. There were no legs trailing behind, only a crimson trail.

Kashif shrieked, running and crying for his mother. He ran through the street, now hell’s forge. Hot embers and ash peppered the ground. He was thankful for the rubber soles protecting his feet. Shadows moved within the fog, becoming exaggerated silhouettes that looked like bouncing imps. The boy passed a cluster of little demons, seeing they were in actuality a man digging at a fresh heap of ruin, shouting names at it.

He ran up to the man. Kashif tugged on his robe. The man looked at him for a moment, and then turned back to the quiet rubble. Kashif screamed, tugging harder. The man backhanded him, sending him to the ground.

“My daughter!” He yelled, throwing his hands at the collapsed home. “My wife! I must find them! Help or leave!”

The boy put a hand to his stinging cheek. Pitch figures slunk from the ruin. The man was oblivious to them, continuing to dig as their red, glowing eyes found Kashif’s. With long fingers, they pointed at him before shooting straight up like dark pillars. He scrambled to his feet and fled, hyperventilating until the world spun. With a gasping breath, he collapsed.

He landed face-down on soiled earth. He heaved, coughing. This time the pain in his chest was electric. His tiny body jolted. After a moment, he realized with shame that he had wet himself.  He coughed again. A gout of blood pushed up from his throat. Whimpering, he sat up, forcing himself to his knees. He took a shaky breath, noticing the hot acrid smoke suddenly smelling of incense.

The boy started and looked up when he heard his mother’s voice. “Muh-mah—” In the heat of the desert on fire, he froze.

His mother was astride a horse.

It was a massive horse, unlike any of the ones he had seen before. This was not the sleek horses of the sands. No, the beast was large and muscular like it could move mountains. That, and it was a sickly colour. Green and grey, like rotting meat. Like all the bodies that had been dragged from ruins after they started to stink. It chomped on its bit revealing a bloated, bruised tongue.

His mother stared down at him, her eyes as milky and faraway as the dead girl’s had been. With horror, he noticed the burns. Her flesh melted and split, disfiguring her once blemish-less skin. Her arm was bent at an unnatural angle. Her right leg was missing at the knee.

“Stand, my son,” she said, her lips moving unnaturally.

Kashif rose, putting his hands in front of the wet stain, embarrassed and frightened. Whatever this animated flesh was, it was not his mother. There was no kindness, no love, but a vast emptiness.
She held out her good arm, bending down. “Come with me.”

He shook his head, taking a step back, seeing that the horse had a mass of shadows circling at its iron shoes. “No.” He said meekly.

The rider’s hand remained outstretched. “Come, Kashif. I have found you. Let me take you away from here.”

A wild neighing from behind caused him to jump. He looked over his shoulder. There reared another horse on its back legs, kicking its front hooves boastfully. It too was unlike any he had seen before. Its coat was redder than flame and wetter than blood. It donned armour, like a warhorse. The only thing that was familiar about it was its slender Arabian build. This was a desert horse.

He saw men on the street behind the red horse as if they were a moving backdrop. The men were armed. The muzzles of their guns flashed and more people screamed. Survivors were gunned down. Kashif felt the corners of his lips twitch into a grin when the man who hit him crumpled to the ground, at last reuniting with his daughter and wife.

“Hurry!” The rider on the first horse urged.

That was another thing Kashif noticed—the crimson horse had no rider.

The red steed dropped to all fours and the ground trembled. It let out heavy breaths, nostrils flaring. Gun smoke trailed from its nose and mouth. With a soft whicker, the horse bowed its head and bent its front legs forward.

The invitation to climb on its back was clear.

Be my rider, Kashif, he could hear it say. Live another day.
“Only to die another,” the first rider interrupted his thoughts. He turned back to it, seeing no longer his mother, but a great hooded figure. He tried to look for a discernable feature, but couldn’t. It was like staring into an abyss. Kashif backed further away from the first horse and its rider, finally spinning around to bolt to the crimson steed.

The scent of oil and copper assaulted his olfactory system. He pulled himself into the saddle, gripping the reins. He had never been on a horse before, but the creature knew what to do. It faced the men with guns and confidently trotted towards them. Kashif pressed against the beast, scared, but they cheered at red horse’s approach. The boy let out a sigh of relief as the men welcomed him, too. He looked over his shoulder.

The rider, his horse, and merciful offer were gone.

Still, he stared after them.

And until his last breath, always would.

I was invited to write this story for an unrealism anthology that will be published later this year. Since I have permission to post this on my blog, I'm sharing this now. Once I have details regarding the e-book I will post them.
This story was inspired by the travesty in Aleppo. Many times civilians are forced to make a decision between death and joining radicals to live another day. Hopefully I have given the subject matter justice, because that's nothing I can do for the people there.
The image isn't mine and I don't know who it belongs to. Let me know and I can add credit. Thanks!