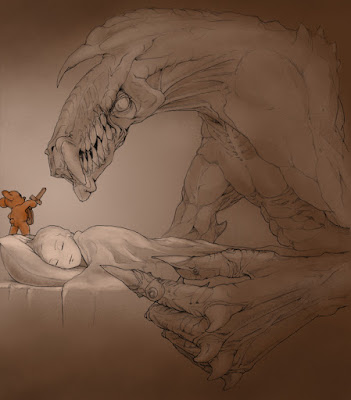 The shadows in the dark room danced across the ceiling. Danny squeezed his teddy bear, Sir Snugglemuffins, tight. He hated going to bed. His room was more than just scary, it was alive. But his parents didn’t believe him.

Thank goodness he had his bear.

The little boy stiffened at the voice. It was coming from behind the closed closet door. The handle of said door turned slowly, and it opened a crack with the haunting creak of unoiled hinges. Two yellow eyes stared back at him.

“You’ll come here,” it said, pushing the door open a little bit more, “or I’ll go there.”
Suddenly, Sir Snugglemuffins’ head snapped the creature’s way. He pulled himself upright. “Get out of here, asshole!”

The closet door stopped creeping open. The bright eyes behind it blinked.

“You want some company in there, huh?” Sir Snugglemuffins continued. “You make me get off this bed, you’ll have my foot up your ass! How’s that for company?”

The bear scoffed, settling back into Danny’s arms. “That’s what I thought.”

Danny kissed the bear on the head. “I love you, Sir Snugglemuffins.”

Hey, everyone. Wrote this for Musae Mosaic Magazine. Decided it was time to place it here. Took me long enough.

Disclaimer:
I do not own that image. Begemott does. I admit, their bear is far cuter than Sir Snugglemuffins, who is a little rough around the edges, to say the least ;)