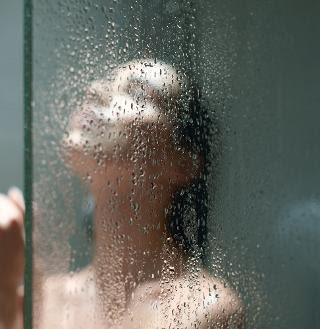 Hot water fogged up the shower’s glass, obscuring the feminine figure behind it. She sighed, craning her neck as rivulets ran down her chest. She grabbed the soap and vigorously lathered.

Suds met blood too tenacious for water alone. She scrubbed her skin, knowing she’d have to bleach the tub. The floors. The walls. Maybe tear up the carpet. Replace it.

Not that it mattered.

The house was hers now.

But it might prove suspicious to do the “renovations” anytime too soon. She’d just have to be thorough until the coast was clear.

Her muscles eased under the spray of water. She had been so tense. Feral. She launched at him in a craze, her hand rising and falling with the knife. It felt like a fever dream.

But it had happened.

He was shocked she did something this time. This would be her last black eye. Still, she’d rather not be charged. She wasn’t getting manslaughter because she fought back for once! No. This was her fresh start. He simply “left” her. Vanished. Men did it all the time.

Even though his body was currently slumped over downstairs.

She started, then wiped the fogged glass. Heart racing, she reminded herself dead men couldn’t walk.
But what she saw proved otherwise.

Hey, everyone! This story is also posted at Musae Mosaic Online Literary Magazine! Feel free to check it out there and read some work from other talented authors.

Disclaimer: I don’t own that image. I think maybe Duravit does. Don’t sue me! This blog has no ads! Unless you count the ads from the app that lets me share my IG on here. Go after those people. I have no money.
Posted by Larysia at 08:10