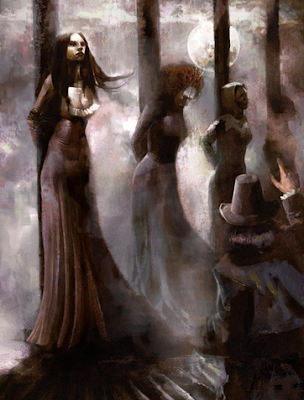 The late-October earth was covered in a layer of frost, except for at the base of the three stakes driven into the village square.

“You’ll burn! The lot of ya!” A crone in the crowd cried, pointing at the alleged bound witches. The rest of the villagers joined in, jeering and throwing up the evil eye.

Wren’s lip curled as she strained against the ropes. These sods couldn’t count or read, but they weren’t entirely stupid. They had found her out. But given the weeping of the two children beside her, they had captured innocents, as well.

“Witches, concubines of Satan!” The priest blared, Bible in one hand and a flaming torch in the other. “You will burn in hellfire! Spilling the blood of cattle to sour our harvest! Have you anything to say for yourselves?”

The girls professed their innocence through tears to an unmoved audience while the priest stared Wren down, not breaking eye contact.

Wren sighed. “Let’s get on with it, levereter.”

His eyes became hard. She knew he was a pilfering git. More reason to set her aflame. He dropped the torch. But the flames didn’t spread upwards. Fire raced outward, to the villagers and their homes, setting them alight.

Wren grinned at their screams. She loved a good witch-hunt.

Disclaimer:
Artist's impression of witches sentenced to burning. From http://commons.wikimedia.org/wiki/Image:Witches_to_be_burnt_at_the_stake.PNG, released under CC by 2.0.