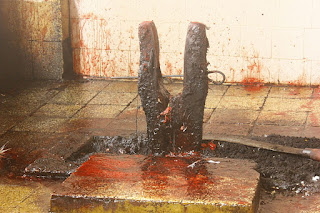 His feet were caked with blood, each step more agonizing than the last. Sandals no more, his pilgrimage was now plagued with torn soles and split heels. Infection was spreading; he could smell rot amidst the copper. His skin burned, in part from the heat and in part from the fever. And he had run out of water. The thirst was maddening.

But he could see the temple.

Straining, he climbed the mountainside, praying under his breath until at last he saw the temple’s stone steps.

Blood trailed up to the stone building’s yawning mouth of an entrance.

He followed it, crawling on his hands and knees.

Once inside, he saw the priests. They were torn in half, their remains encircling the great altar. Where there should have been a stone idol, there was none.

He looked over his shoulder, seeing his god animate. Flesh, feather, and as hideous as impressive, it stood.

“My divinity!” He croaked, prostrating himself.

It kicked him over onto his back.

“I journeyed for your salvation!” Tears welled up in his eyes. “I am happy to receive it.”

The pain was greater than what he endured the entire quest, but the release into eternal hellfire was worse.

I did this piece  for the flashfiction magazine, 200-Word Tuesdays. I selected June’s theme of “Pilgrimage.” This month I was actually one of the folks who suggested a theme. A poll was done and mine was one of the themes chosen.

I drew inspiration from my usual fascination with religion, deities, and demons.
Thanks and take care!